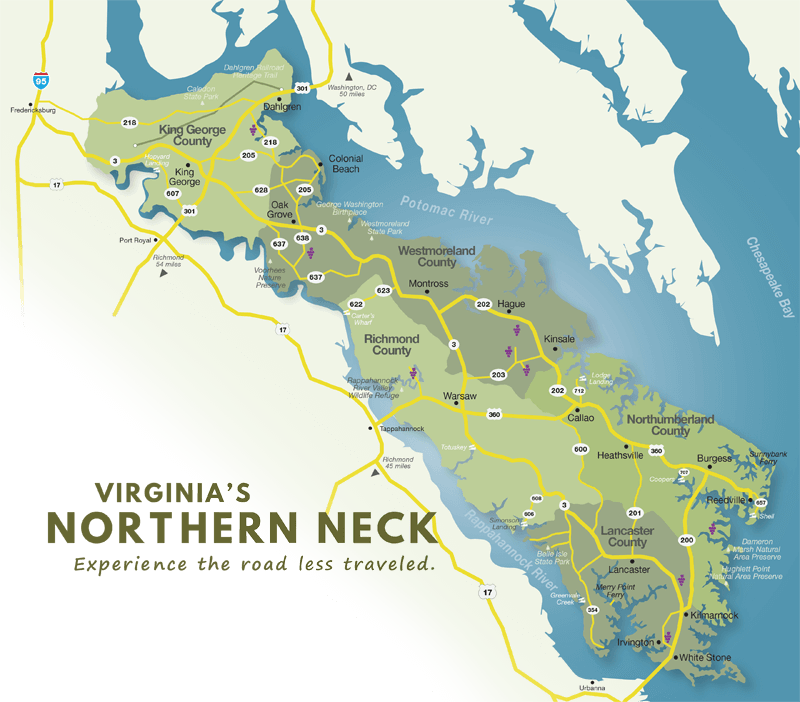 Welcome to the Northern Neck,

where the Potomac and Rappahannock Rivers meet the Chesapeake Bay

A short drive from the mid-Atlantic metropolitan areas, one can truly step back in time and experience the road less traveled. From northern Virginia and points west, start your driving tour along State Route 3 entering the Northern Neck through its gateway county of King George or head south from Maryland across the Nice Bridge or from the south east across the Norris Bridge accessing the lower “Neck.”

Once in the Northern Neck (NNK), we encourage you to slow down your heart rate and reconnect with nature and history of one of the best kept secrets along the eastern seaboard. You’ve entered what some consider the “birthplace of our nation’ with three of the first five American presidents born here along with other prominent families that helped form our nation.

Steeped in history, it’s a land where generations of watermen continue to harvest Rockfish, Blue Crabs and the ever famous Virginia Oyster from the waters surround the peninsula. Family produce farms are still flourishing, so don’t pass up an opportunity to stop at any of our roadside stands and farmers markets to meet our farmers and fishermen….they are all part of the experience.

Whether your visit is one day, one weekend or one week, you’ll find plenty to see, do and experience in our unique region of Virginia known as the Northern neck

The History of Virginia’s Northern Neck

Originally inhabited by eight Virginia Indian tribes who established villages along its shores, Virginia’s Northern Neck is one of the most historic regions in Virginia. In 1608, our first tourist, Captain John Smith, referred to it “as a place heaven and earth never agreed better to frame man’s habitation.”

This peninsula nestled between the Potomac and the Rappahannock Rivers and spilling into the Chesapeake Bay was part of the enormous 1649 land grant by Charles II, known as the Fairfax Grant. The bountiful waters of the Potomac and Rappahannock Rivers, and the Chesapeake Bay supported and induced English settlement. The English built stately homes and farmed tobacco for export to England, which became the basis of the Northern Neck’s economy during the Colonial era. The Northern Neck’s most famous son, George Washington, born on Pope’s Creek off the Potomac River, called the region “the Garden of Virginia.” Our nation’s fifth president, James Monroe, was born in Westmoreland County in 1758. 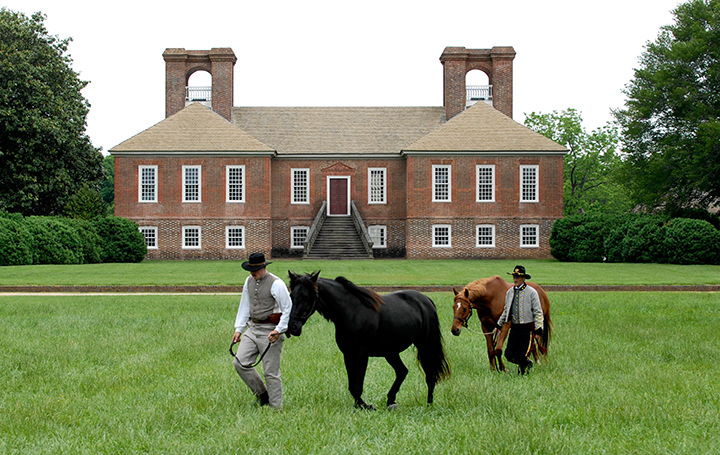 The Lee family of Virginia called the Northern Neck home and built Stratford Hall in the 1730s, of bricks fired from the clay soil on the premises. A son of Thomas Lee, Richard Henry Lee, co-wrote the Westmoreland Resolves, which proposed American independence in 1766 in protest against the Stamp Act. Richard Henry Lee and his brother Francis Lightfoot Lee were the only two brothers to sign the Declaration of Independence. The last Lee to survive to maturity, Robert E. Lee, was born at Stratford Hall in 1807.

During the Steamboat Era, from 1813 to 1927, the Northern Neck utilized the network of about 600 steamboats to move people and products throughout the Chesapeake Bay region. In addition to facilitating trade of local produce, seafood and tobacco for manufactured goods, spices, and fruits, the steamboat made the Northern Neck more accessible to Baltimore and provided the residents with entertainment from the James Adams Floating Theater that circulated ports of call throughout the Chesapeake Bay region.

The waters of the Potomac River, Rappahannock River, the Chesapeake Bay and their tributaries provide a haven for boaters and water enthusiasts, and have supported a fishing industry for generations. At the present, Colonial architecture, small-town charm, bed & breakfast inns, eight wineries, seventeen museums, historic sites, marinas and retail shops are among the valuable assets that attract visitors to the area.