The map below includes sites of significance for African-American education in the Northern Neck, including both existing buildings and sites where schools were known to be, but that are no longer extant.

Public secondary education was not a possibility for the African descendants in the County until 1937. The Armstead Tasker (A. T. Johnson) Johnson High School was the “only” public high in Westmoreland for the youth of African descendants until 1970- when the legal case of James T. Brown v. Board of Education (Brown v. Board of Education) came before the courts. In 1953, Chief Justice Warren declared   segregation in “public” schools unconstitutional – mandating integration of all public schools. Seventeen years (September 1970) later, Westmoreland County integrated its school system. 1970, A T Johnson High School converted to A. T. Johnson Junior High School, 1990 renamed to A. T Johnson Middle school until 1998. In 1999, the school was reintroduced to the community as the A. T. Johnson Museum, pictured below. 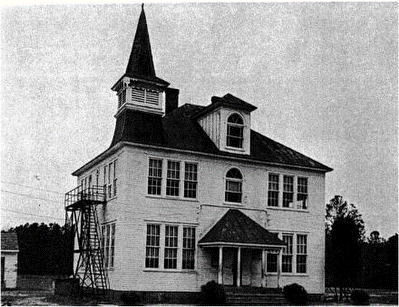 Beginning in 1917, The Julius Rosenwald Fund was instrumental in the construction of thousands of schools for African Americans across fifteen southern states. A few of these “Rosenwald Schools” were built in the Northern Neck, and the Fund covered only part of the construction costs, with the balance being raised locally with community donations and through churches.

In 1916 the Northumberland County Training School begun construction by members of the African American community using the Tuskegee building plan, site plan, floor plans, landscape plans, and elevation plans as drawn by two African American professors at Tuskegee College. Establishing a campus complex consisting of an elementary school; science building, home economics building opening in 1917 with an enrollment of 180 students; adopting the school curriculum as outlined in” The Negro Rural School and its Relations to the Community”

On 12 Nov. 1932, under its second principal the Reverend Dr. Henry M. Ruffin, the school rebranded to the Julius Rosenwald High School. It closed in 1958. This 1916 building is undergoing a massive restoration project and believed to be the only 2-story Tuskegee Planned school still standing.

Most of the schools on this map were built by similar community-based fundraising efforts.